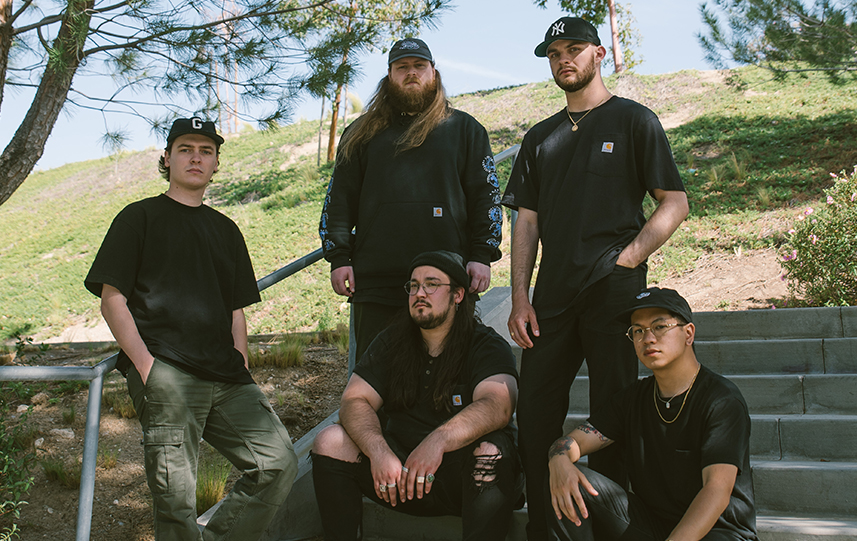 Knocked Loose (Louisville, KY) is the obvious evolution to decades of bands like Integrity, Disembodied, Botch and others– total and complete integration between metal and hardcore into a singular, seamless entity. Ably combining the teeth-clenching hatred of a hardcore band with the unmitigated technicality and ferocity of metal, Knocked Loose have conceived state of the art hatred– a true melting pot of ideas that combines pit-ready riffs, memorable songwriting and deviously clandestine melody into a boiling-over pot of vitriol. Since 2016’s Laugh Tracks, Knocked Loose, comprised of the young Cole Crutchfield (rhythm guitar), Bryan Garris (vocals), Isaac Hale (lead guitar), Kevin Otten (bass) and Kevin Kaine (drums), have taken a huge leap, moving from upstart hardcore-influenced favorites to bonafide key figures of the genre. Their debut offering was a revelation, taking the world by storm and establishing the band as a major force within metal, hardcore and beyond. Following the well received effort, Knocked Loose hit the road and hard. The band is quick to single out turning point tours such as Warped Tour 2017, a stellar showing at This is Hardcore 2018, headlining gigs over the legendary Terror and Australia/Japan tours as crucial to their growth, and while that may be partially true, the real key component to their success lies beneath all of that– a strong attention to excellent songwriting and a near-undying work ethic.

Gatecreeper: A savage, old-school death metal unit based out of Arizona, Gatecreeper’s uncompromising blend of doom and death invokes names like Grave, Obituary, Bolt Thrower, and Dismember. Founded in 2013 around the talents of vocalist Chase Mason, guitarist Eric Wagner, bassist Sean Mears, and drummer Matthew Arrebollo, the quartet issued a series of independently released EPs and splits before inking a deal with Relapse Records. Their full-length debut, 2016’s Sonoran Depravation, was produced by Ryan Bram at Homewrecker Studios and mixed by Kurt Ballou (Converge, Nails, Black Breath) at God City Studios. A split LP with Take Over and Destroy arrived later that same year, and in 2018 the band issued another split LP, this time with crossover/thrash unit Iron Reagan. In 2019, the band unleashed their sophomore full-length effort Deserted. ~ James Christopher Monger, Rovi

Kharma: Formed in 2015 in Chicago, KHARMA deals in gritty, metallic hardcore with walls of sound to pummel the listener into submission. Directly influenced by their city, from the forebears of their scene to the daily circumstances that inform their lyrics and unrelenting aggression, the quintet calls to mind the blunt brutality of acts like Neglect, Billy Club Sandwich, Bulldoze, and Arkangel.   In the Fall of 2020, KHARMA returns with their most mature and downright hostile release to date – Most Dangerous Game, due out on Flatspot Records. Throughout the 5 tracks, KHARMA flexes their shattering sonic assault on topics such as classism, police brutality and racism, systems of oppression the band has been challenging since their inception. Inspired by Richard Connell’s “The Most Dangerous Game”, the band applies the analogy to varying degrees within the dismal stories told on their label debut. The mix of KHARMA’s pulverizing riffs with harsh, spiteful vocals amount to a concoction of mosh-ready and genuine anthems for the dark modern age. Recorded and mixed with Andy Nelson (Weekend Nachos) at Bricktop Recordings in Chicago, the no-frills and fervid performances on Most Dangerous Game proves why KHARMA has become an up and coming favorite to watch on hardcore bills throughout the country and solidifies their further rise in Chicago’s heavy music scene.